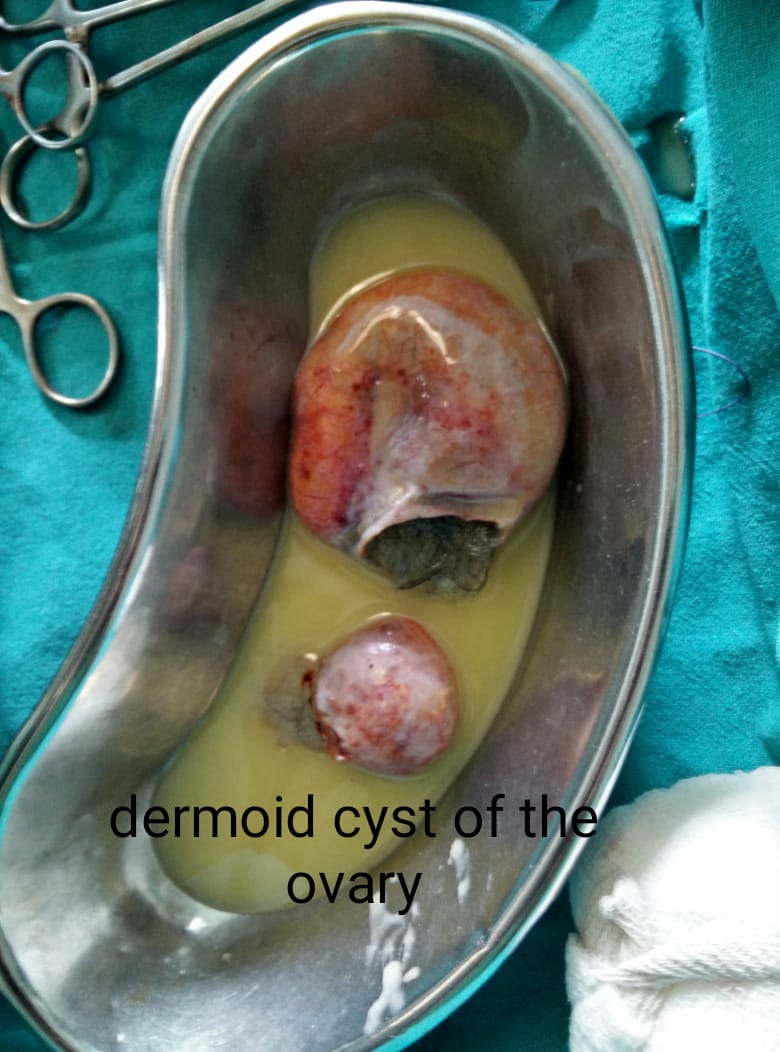 A dermoid cyst (also called as “mature teratoma”) is a sac-like growth that may be present at birth. It contains structures such as hair, fluid, teeth or skin glands that can be found on or in the skin. In some cases, especially when in the ovary, it also contains thyroid or brain tissue. Ovarian dermoid cysts, which not uncommonly are found in both ovaries, can develop in a woman during her reproductive years. The word “teratoma” is derived from Greek work “teraton” meaning monster. It was initially used by Virchow in 1863. The term “dermoid cyst” was coined by Leblanc in 1831.

Mature cystic teratomas account for 10-20% of all ovarian neoplasms and are the most common neoplasm in patients of reproductive age group. Mature teratomas are usually benign, but in 0.1-0.2% of cases, it may undergo malignant transformation. They may remain asymptomatic or may present with acute abdomen due to torsion, infection, or rupture. Spontaneous rupture of the teratoma is rare and has been occasionally reported. Here we present a case of deroid cyst of ovary, which is bilateral and which is a rare presentation.

Cystic teratomas make up approximately 15-25% of ovarian neoplasms. Almost 10-15% is bilateral. They are composed of well-differentiated derivatives of three germ layers-ectoderm, mesoderm and endoderm. Mature cystic teratomas, often referred to as dermoid cysts, are the most common germ cell tumors of the ovary in women of reproductive age and are usually asymptomatic until they reach considerable size. Though they are common in reproductive age, but they can occur at any age including the post-menopausal woman. Most are 5-10 cm in diameter when diagnosed and on sectioning they usually contain thick sebaceous material, tangled hair and various dermal structures. One of the major complications seen in cystic teratomas is torsion, a partial or complete twisting of the ovarian suspensory pedicle causing severe pain, nausea and tissue necrosis. Malignant transformation is uncommon, occurring in approximately 0.1-0.2% of cases usually in older women. Ovarian teratomas have a predisposition to right lateral side.

Endometriosis co-existing with bilateral dermoid cysts of the ovaries is a rare occurrence although both benign conditions are said to be common in women in reproductive age group. This association has a clinical relevance because an endometriotic pathology can reveal a silent teratoma with bilateral ovarian localization.

In general, removing a dermoid cyst is not an emergency procedure. If a dermoid cyst ruptures, becomes inflamed, or causes pain or fever, a person should seek immediate medical advice. Treatment depends also upon the patients age. In younger woman, it may be possible to remove the dermoid cyst while still leaving behind normal ovary tissue for needed hormone benefits or future pregnancy. Autoimmune hemolytic anemia has been noted occasionally in patients with teratoma of the ovary, especially mature cystic teratoma.

Ovarian teratoma commonly has an indolent course and presents with abdominal pain due to complications such as torsion, hemorrhage, or infection. Spontaneous rupture of teratoma is rare due to its thick wall and it usually occurs in the peritoneal cavity. Rupture into a hollow viscus due to adhesions is extremely rare complication, which may present as perforation peritonitis.
Although ovarian teratomas are common day, we present this case because of its bilateral presentation, which is rare and the mode of treatment and the complications if not treated properly.

Dr. Ruchi Tandon is a reputed Gynecologist practicing in leading hospitals in South Delhi namely Max e Apollo hospitals with over 14 years of experience in handling all kinds of Gynecological conditions including dermoid cysts of ovary.