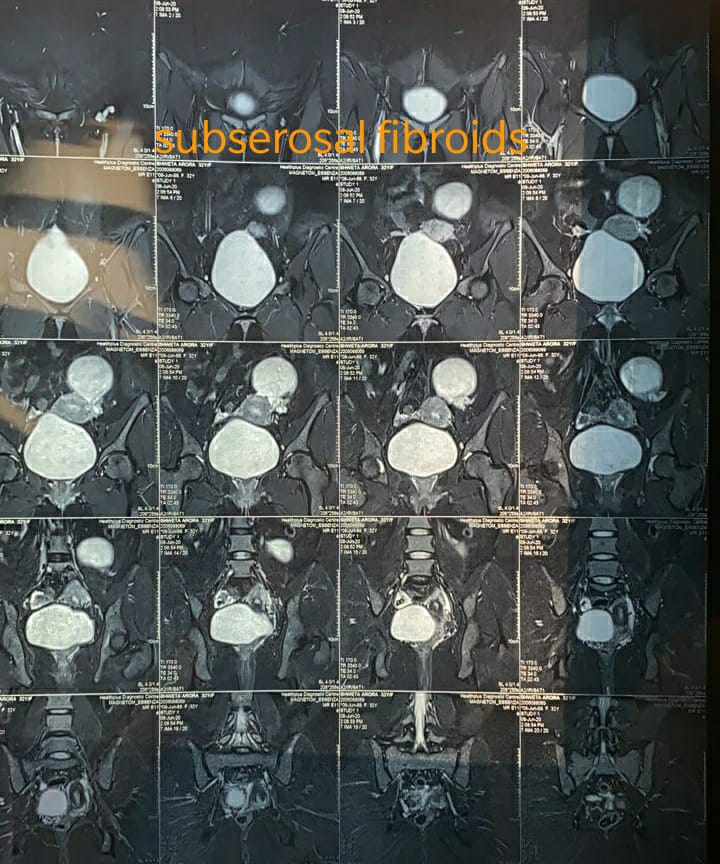 Fibroids are abnormal growths that develop in or on a woman’s uterus. Sometimes these tumors become quite large and cause severe abdominal pain and heavy periods. In other cases, they cause no signs or symptoms at all. The growths are typically benign, or noncancerous. The cause of fibroids is unknown.

Fibroids are also known by the following names:

What are the different types of fibroids?

The type of fibroid a woman develops depends on its location in or on the uterus.

Subserosal fibroids form on the outside of your uterus, which is called the serosa. They may grow large enough to make your womb appear bigger on one side.

Subserosal tumors can develop a stem, a slender base that supports the tumor. When they do, they’re known as pedunculated fibroids.

These types of tumors develop in the middle muscle layer, or myometrium, of your uterus. Submucosal tumors aren’t as common as the other types.

It’s unclear why fibroids develop, but several factors may influence their formation.

Estrogen and progesterone are the hormones produced by the ovaries. They cause the uterine lining to regenerate during each menstrual cycle and may stimulate the growth of fibroids.

Fibroids may run in the family. If your mother, sister, or grandmother has a history of this condition, you may develop it as well.

Pregnancy increases the production of estrogen and progesterone in your body. Fibroids may develop and grow rapidly while you’re Pregnant..

Fibroids are common, with around 1 in 3 women developing them at some point in their life. They most often occur in women aged 30 to 50.

Fibroids are thought to develop more frequently in women of African-Caribbean origin.

It’s also thought they occur more often in overweight or obese women because being overweight increases the level of oestrogen in the body.

Women who have had children have a lower risk of developing fibroids, and the risk decreases further the more children you have.

What are the symptoms of uterine fibroids?

Most women with fibroids will experience no symptoms at all. However, large or numerous fibroids can cause the following symptoms:

How are uterine fibroids diagnosed?

Fibroids are most often found during a physical exam. Your health care provider may feel a firm, irregular (often painless) lump during an abdominal or pelvic exam.

Scans can confirm a diagnosis. These tests are the two main options:

How to manage fibroids in covid pandemic times?

Laparoscopy and open myomectomy are both options in covid pandemic depending on the extent of symptoms and position of the fibroid.

Dr. Ruchi Tandon is a Gynecologist, practicing in leading hospitals of South Delhi , max smart superspeciality hospital and Apollo Cradle Royale , with over 14 years experience in handling all kinds of fibroids and complications.